This morning, Shaun had yet another hospital appointment, but as it was an early one at Deal, we had arranged to meet friends at Fowlmead Country Park at Sholden, between Sandwich & Deal. It's a 200 acre park, regenerated from the shale spoil tip at what used to be Betteshanger Colliery.

Betteshanger was the last of Kent's four colliery's to close & from 1989 to 2000, it was left to nature. In 2000, SEEDA (South East England Development Agency) bought the land & set about turning it into a country park, complete with a 2 mile cycling track. The park opened to the public in 2007 & soon proved a popular place to visit.

The cycling track is used by professionals as well as the general public & you can also go running, mountain biking,  collect fossils & take part in orienteering, geocaching, archery, walking, &  bushcraft . There is a BMX area for kids to practice their skills & a play area for children aged 4-14. It costs £1.50 to park all day & there is a cafe that serves food from 10am.

In the first 2 or 3 years, we went quite a few times. There's always something different to see in each season & as we've not been able to go for a couple of years, I was really looking forward to it.

The day dawned bright & sunny & as I'd put the mobility scooter in the car last night, all I had to do was get Shaun to the car & put the wheelchair on the backseat. We set off & got to the hospital at about 8:45am. We made our way to the clinic & only waited for 5 minutes before being called in. We were out by 9am, 10 minutes before the actual appointment time !! How's that for service, eh ? :o)

A flurry of texts was sent - me to Val, Val to Kris & back again - & we arranged to meet in the car park at Fowlmead.

We pulled up & I set to, getting the scooter out of the back of the car. When it was all put together, Shaun turned the key & it just beep-beep-beeped & wouldn't move !!! Now, it was fine when he drove it down to the car last night & it was fine when he used it a few days ago. This exact same thing happened in April when we took grandson 1a to Dover Castle :o(  We had it looked at by the mobility shop we use & they replaced a bush or something (technical stuff & I are NOT friends !!!) & it was fine when we took grandson 1a to Walmer Castle on 2 July. However, it seems that there must be an electrical problem or something's been shaken loose on the drive from Ramsgate to Deal & now, we have to wait for the mobility people to pick it up & have a look on Friday afternoon.

To say I was disappointed is probably the understatement of the year. The scooter wasn't the ONLY thing that beep-beep-beeped, let me tell you !! It seems whenever we try to go somewhere or do something - which, given Shaun's health problems isn't that often - something goes wrong & stops us from having fun :o(

By now, Val had arrived & suggested we have a cuppa while we wait for Kris, Steve & their grandsons,  & then decide what to do instead of walking around the park. I got Shaun into his wheelchair & off we went to the cafe. While we were there, Shaun spotted a notice about disabled bikes for hire at the park, so once Kris & Steve arrived, we went to see what it was all about.

WELL !!! They have bikes that are pedalled BY HAND !!! The day was saved !!! Val sorted out the hiring details while Shaun had a practice to see if he could use the bike. His legs had to be strapped on to stop them doing their own thing - which, as he can't control them, they do frequently !! :o) - & as I had to lift his leg up over the crossbar, everyone else held the bike still so he didn't fall flat on his face :o) When he was settled, off we set, on our grand adventure :o) 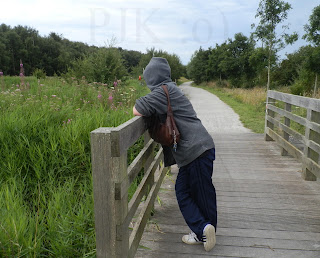 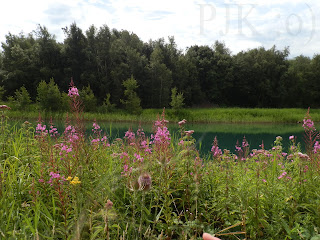 A view of Fowlmead lake. This lake is just BEE-OO-TEE-FUL. You can't see much of it at this time of year because of the greenery, but in the winter, you can really see how big it is. 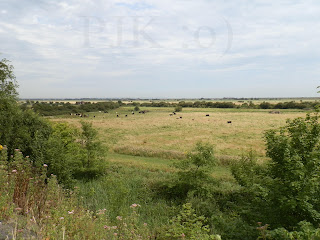 Looking across a field of cows towards Sandwich. 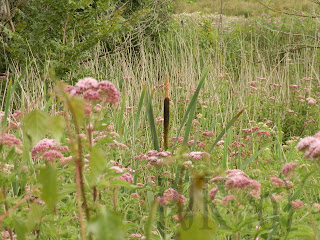 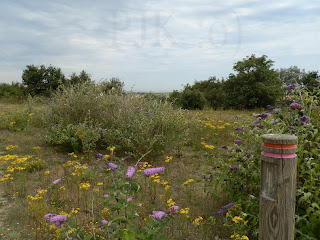 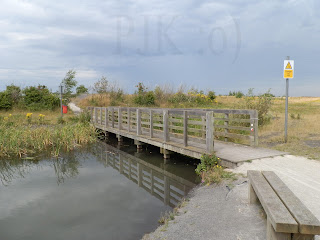 The little bridge over the pond. 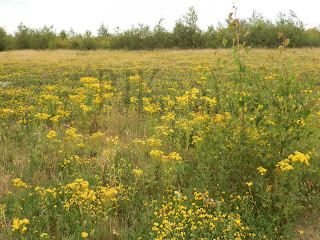 This photo reminds me of the Eva Cassidy song *Fields of Gold*. 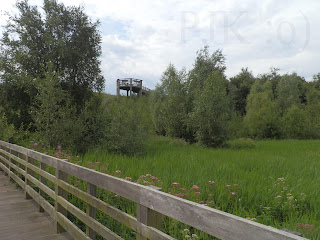 The lookout seen from the bigger bridge. All the green on the right of this photo is Fowlmead lake :o) 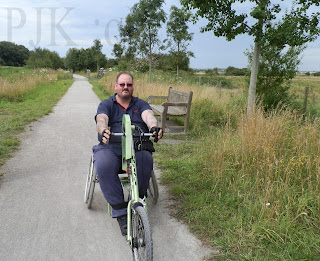 Shaun on his chariot :o)  Even with his legs strapped in, his right foot still managed to slip forward. It just will not do what it's supposed to. 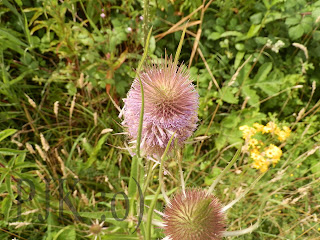 Beautiful teasels :o) VERY sharp & spiky, as I found to my cost when I brushed past one :o( 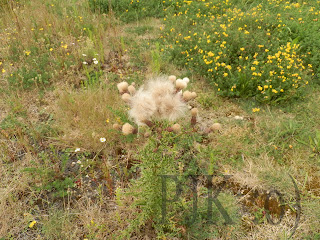 Val & I have christened this the *Teddy bear shaving bush*  - yes, bush, not brush -  plant !! It is the softest thing I think I've ever felt in my life. 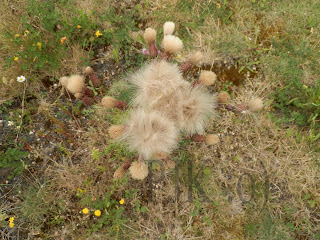 We patted this little plant over & over again - it was SO soft & springy, just like a comfy cushion :o) 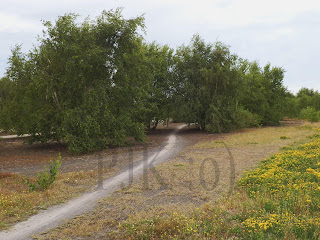 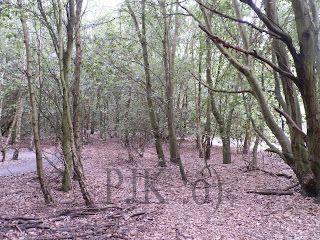 I talk to the trees, but they don't listen to me !! :o)
Talking of trees, while we were wandering round, Val pointed at a really gnarled & multi-branched tree & said  *I wonder how old that tree is*. So, being the nice, kind girl I am I went & asked it !! :o) I don't think it understood English though, cos it didn't answer me :o) 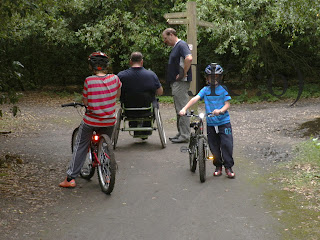 The winner of the bike race - Shaun, talking to his coach/trainer, Steve & the runners up, Kris & Steve's grandsons :o)

After all the kerfuffle with the scooter, we had a lovely morning & it didn't rain till we got to the car :o)

No matter what's happening in your life, a couple of hours spent in the company of good friends is the ideal pick-me-up, so THANK YOU, Val, Kris & Steve, for a fab morning :o)

I can caterwaul - or should that be PAT-erwaul - to my hearts' delight here. There are no unsuspecting cyclists or walkers to fall in the lake when they hear me sing !! :o))
Posted by PJK :o) at 9:57 pm 6 comments: